When actress Karen Gillan considers a new movie or TV role, she starts by taking an academic-style deep dive into the character’s psyche. (Who are they? What motivates them? What hurt have they experienced?) Then she asks herself this question: Do I want to know what it’s like to carry that pain? If the answer is yes, she’ll sign on to the project. If it’s no, she’ll pass. That admirable curiosity about other people’s lived experiences is what led her to arguably her best-known part to date: Guardians of the Galaxy’s tortured bionic antihero Nebula (a role she reprises in this summer’s Thor: Love and Thunder).

“My favorite thing about playing Nebula is exploring what it feels like to be the scapegoated sibling within a toxic family dynamic,” says the 34-year-old. “Before I even got the role, that drew me to it. There’s a lot of material there.”

Nebula’s familial situation is a far cry from what Karen experienced, growing up as the only child of two very supportive parents. Karen has been laser-focused on acting since age 13, when she filmed homemade horror movies and wrote letters to agents from her bedroom in Inverness, Scotland—a part of the country known for rolling green hills and medieval ruins. She later enrolled in the Italia Conti Academy of Theatre Arts in London for a short time and landed her first breakthrough role as Amy Pond in the beloved U.K. television series Doctor Who. Though she’s filming Guardians of the Galaxy Vol. 3 in Atlanta when we speak, she lives in Los Angeles, wants to move to New York, and has never truly felt at home since she was a kid. 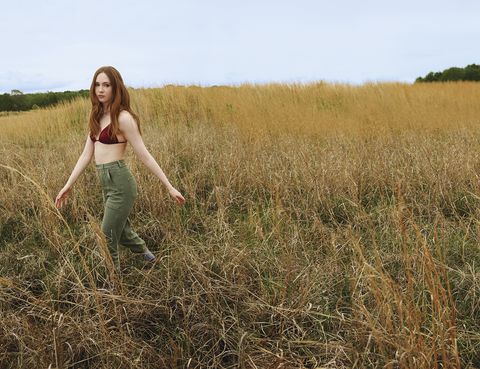 That’s maybe why, in her free time, Karen reads critical-psychology essays—not only to better embody her characters’ experiences, but to analyze her emotional landscape. She says her anxiety, which often keeps her up at night, has gotten worse since she found fame.

“It’s been easier to ignore my body than it has been to confront the situation,” Karen says. “I’ve repressed the feeling instead of taking it seriously and listening to my body. And I’m just now turning that around.”

Her imposter syndrome is surprising even to her, considering she’s the first person to tell you about her hard work and ambition. (Random fact: She’s also developing an app!) And though her career is a lineup of iconic anti–damsels in distress, she says she’s always starstruck by the “giant movie stars” she’s with on-set.

“Some days I don’t feel anxious at all; then others, I’m like, ‘I can’t do this. This is insane. This is a big, huge movie and I have to do this in front of people. There’s no way,’” she says. “I literally think I can’t do it. That’s how bad it gets. You can’t really reason with someone when they’re in that state of mind.” So, she has adopted a new technique to deal. “I invite all of the anxiety in,” she says. “It may sound weird, but I’ve been researching the psychology of it.”

Yes, Karen discovered (and delved into) this method on her own, and it looks like this: She lies down on the floor and asks herself what she is scared of, then wills herself to feel all of her fear. “With anxiety, our instinctive response is to suppress it and tell yourself not to be scared and to stop feeling it,” she says. But according to her research, that only fuels the anxiety and makes it grow. So she’s been training her brain to fully feel it. Her primary mission isn’t to get rid of it, but to be okay with its presence. And so far, the approach is working for her. The proof: When she suppresses her anxiety during the day, it keeps her up at night. But if she lets herself embrace it, she later gets her coveted nine hours of sleep. 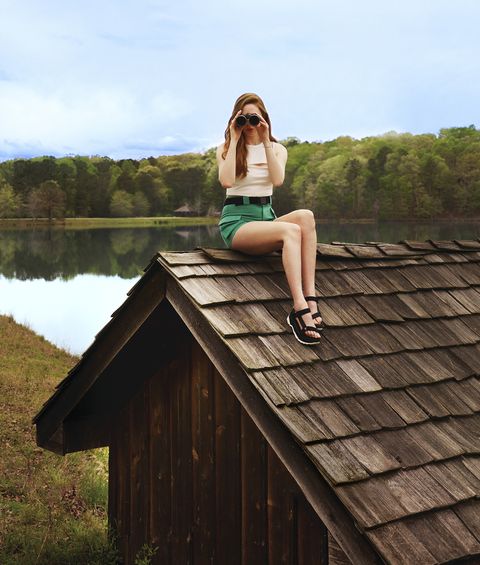 Another slightly unexpected plot twist for Karen: She’s known for fight scenes that require her to train an hour a day with an ex–Navy SEAL, yet she didn’t work out a single day in the months that her industry completely shut down for the pandemic.

“I didn’t move a muscle,” she admits. “I just couldn’t bring myself to work out. I felt like a slug. I’m usually a very driven person.”

She originally started paying more attention to fitness when she joined the Marvel Cinematic Universe at age 25. As someone who took on so many action-based roles, her training typically involved whatever was needed to build comic book muscles or fight foes with bowling balls and nunchucks. But she only recently (thanks to that pandemic pause) understood that exercise does so much more for her. It helps her feel good, builds her confidence, and ultimately manages her anxiety so she can keep pursuing her dreams.

“I didn’t realize how much better I felt mentally until I stopped,” she says. “I didn’t feel as on top of the world as I normally do if I’m regularly working out and eating well. I was foggy and down. And the anxiety is worse when I’m in a down state of mind.”

Now, for mental clarity, moving once a day is a “non-negotiable.” For Marvel training, her coach focuses on weight lifting, targeting biceps, triceps, shoulders, and legs, with a little cardio thrown in. And in her downtime, Karen is drawn to barre classes, which she notes are her personal favorite, along with Spinning.

On an ideal day, she wakes up at 8 a.m. and makes herself three poached eggs and an oat milk latte with cinnamon. Hummus and vegetables are snacks before lunch: chicken breast, black rice, and anything leafy green. Dinner is steak or salmon with potatoes or sweet potatoes, asparagus, and portobello mushrooms.

As we talk about her overall habits, Karen adjusts and then readjusts her denim jacket over her floral dress and shifts her posture to be more upright. This is something she does throughout the day to remind herself to take up more space.

“That’s one physical affirmation I try to do with myself—just get into a more confident body position,” she says, sitting up even taller. “I roll my shoulders back, sit up tall, and stop fidgeting.”

Making your presence known is a theme that comes up often with Karen. Case in point: Her ongoing dedication to her mental health led to a breakthrough with her therapist, who emphasized the importance of not just feeling feelings, but voicing them aloud. “If you don’t communicate,” she told Karen, “you’ll harbor resentment.” And that’s where boundaries come in, which are another aspect of mental wellness that Karen is working on. (Setting them, then recognizing—and communicating, verbally—when one has been crossed.) “It’s vital in terms of self-care,” she says.

Karen shifts her posture once more as she talks about how much she has downplayed her ambition when talking to people about her dreams, because she always thought it would be perceived as negative. “I’m starting to talk more freely now. The fact that I ever had to dampen that is quite concerning.”

For Karen, it’s clear that the best self-care for her physical and mental well-being is not just intensely knowing herself in both the academic and the practical sense, but also being open and willing to share who she truly is with others. After all, it’s the most important role that she will spend a lifetime living—and perfecting. And she’s off to a flying start. 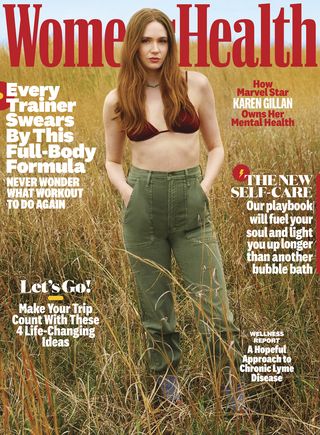 This article originally appeared in the July/August 2022 issue of Women’s Health.