Welp, there is yet more royal helicopter drama for us to go over.

Quick refresher: the Queen was recently "uncomfortable" with Prince William and Kate Middleton's frequent use of the royal helicopter to travel from their country home at Anmer Hall to London, especially since she doesn't want direct heirs to the throne traveling together.

But apparently the Cambridges were seen boarding a helicopter with their kids after the Queen made herself clear, and she isn’t pleased. More specifically, she’s “summoned” the couple to have a word about their ongoing helicopter use.

According to royal expert Neil Sean, via The Express, "It looks like Prince William and Catherine have defied orders from the Queen. This week they were seen boarding a helicopter in the back area of Kensington Palace as they enjoy a short holiday. This left the Queen concerned." 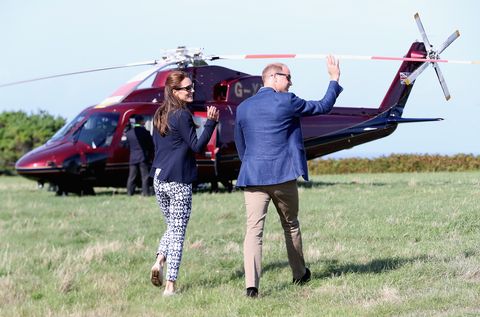 Neil went on to explain that "It is a royal protocol for people to travel in separate aircraft for very obvious safety reasons," and said "the Queen spoke rather firmly to William about this. But on this occasion, perhaps it slipped his mind."

He then noted that "When Prince William and Catherine return back from their short break, they will be summoned to Windsor to explain the cause of their actions."

This update comes just over a week after royal reporter Richard Palmer told The Express that "the Queen felt, certainty let it be known, that she felt uncomfortable about the entire family traveling by helicopter" and that "there was a little bit of official unhappiness about the amount of time that the Cambridges were spending traveling between Anmer Hall in Norfolk and Kensington Palace, their London residence, using helicopters."

Though, apparently "people in the Cambridges' camp would say actually that didn't happen very often at all" so maybe everyone can relax!

A WH Editor's Honest Review Of The Hydrow Wave

Your Insider's Guide To Disney World

I Tried TikTok’s Most Controversial Foundation