As a kid, I was bullied for my darker skin tone and being overweight, and literally wanted to run from being Indian. I just wanted to be a skinny white girl. That way, I didn’t have to deal with the bullying and pressure to conform. I felt like I didn’t want to live in this body as myself.

I’m darker-skinned, and lighter skin is so worshiped in India, where I was born. When I was 8, my family moved to the United States. Suddenly, almost everyone had lighter skin compared to me—it was hard. I felt like I didn’t belong. Even within my own family, relatives would tell me, “You’re darker, we want you to stay out of the sun.”

I dyed my hair, wore colored contacts, and even avoided getting on the train with my parent’s home-cooked food because I was afraid I’d get judged for the smell. If my friends came over and my mom was in an Indian outfit, I’d ask her to change. Her response? “Hell no, I’m not changing for anyone.” I admire her confidence, even though I’ve struggled with emulating it myself. 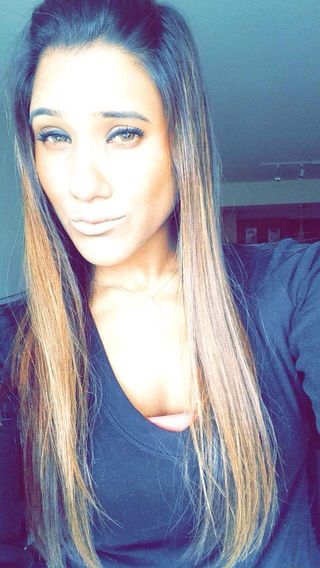 Deepti was 24 when she took this photo, back when she would dye her hair and wear eye-lightening color contacts.
Courtesy

Now that I’m an adult, I can’t believe I ever ran from such a beautiful culture that has such deep values. But, those small comments kids would make, like about my food smelling bad, really impacted me.

I tried only dating white people because I was insecure about being Indian.

My first dating experience was in college, and to be honest, I felt like I’ve been settling ever since. You know that saying: You settle for what you think you deserve? I was always the rock and pillar for everyone else in my life, so I didn’t think I deserved to ask for that from a partner.

My last ex was white, and we dated for about six years. I hid it from my parents the entire time—even though we lived together. In an Indian household, you don’t bring home a boyfriend unless you know he’s “The One.”

After we broke up, I actually even tried Dil Mil, a dating app for Indian people. I really tried to create a connection with someone from my culture for my parents. All I ever want is to make them happy after everything they’ve sacrificed for my siblings and me. It just never panned out. It’s not like I was making an active effort to stay away from Indian men. I found Indian men attractive, too. But I'd been so surrounded by white people for the majority of my life, that was just the first thing I organically gravitated toward when I started dating.

Meeting Shake on Love Is Blind was a blessing in a way.

There was an instant connection once I found out Shake was Indian, too. I knew that he was raised exactly the same way I was, especially because we’re both first-generation immigrants with really strong mothers. We also talked a lot about the old, antiquated Indian traditions that we didn't like. But it wasn't just the Indian thing with him. We bonded a lot over having the same taste in music, for example, too. In the pods, he made me feel like I could really envision and see what my life with him was going to look like.

What’s interesting is that normally in Indian families, the wife caters to the husband, but I have to say that with my family and Shake’s, our moms are way more dominant than our dads. I love Shake’s mom. She’s so sweet and grounding and always had my back. Even if it meant going against her son, she stuck up for me. And my mom taught me to always be financially independent and never rely on a partner. She herself works 60 hours a week and loves it. She’s such a great example.

In that way, Shake and I are super similar and, even though our relationship ended, I think I needed to be in his life for a reason. He says that to me all the time, too. He says that, because of me, he sees and feels things differently and looks for substance over superficiality.

Love Is Blind challenged me to talk about sex and intimacy openly.

It’s so taboo to do that in our culture, and I saw it in my relationship with Shake. Even though we talked about physical stuff and how he was having troubles with attraction, did we really go deep and have those important conversations about being intimate? No, we didn’t. It’s so weird and awkward to talk about that, and it definitely comes from both of our upbringings.

Now, I’ve taken a really solid stance on being way more open about my sexuality rather than being embarrassed by it. I talk about sex and intimacy openly on my newfound platform, and it doesn't have to be awkward!

There’s a lot of our relationship that viewers didn’t get to see.

Before filming, I’d built up my confidence and self-esteem so much. In my life, I had received so much criticism about my appearance, from my skin color to my weight, so I just made an active decision to start being braver in my approach to men. I'd walk up to a guy I had a crush on and simply say, "I like you," and when they reciprocated, I was like..."Oh wait, that's all it takes?"

There was another person in the pods who was white that I was really connecting with, and it would have been an amazing and fun lifestyle, but I just had more uncertainty about how it would turn out.

But once Shake and I got engaged, he kept telling me, “You’re not good enough to be my wife.” At first, I kind of took it as a challenge. But when someone who was supposed to become my husband constantly told me that I wasn’t good enough, I started to question myself.

Now that I’ve seen the show, I feel I was portrayed as passive and gung-ho about our relationship. But I wasn’t confident about Shake, either. I expressed a lot of my reservations and doubts openly, even though viewers don’t get to see that.

I slowly started to see that the qualities I found positive about him in the pods were kind of a front. And I started seeing a lot of red flags once we spent time together face-to-face. When I started living with Shake, I realized there were a lot of qualities I’d have to settle for if we got married. For instance, when he met my family, they asked him what values he looks for in a relationship, and he wasn’t able to answer. That’s such a basic question, and he said, “I’m going to have to take a day to think about that.” If you can’t answer that, you’re not ready to get married and I’m not going to be the one to try to make you ready. It’s not my responsibility to get someone there.

Towards the end of filming, I realized this person wasn’t meant to be in my life—especially as a husband. It was very frustrating to watch the show back and see how Shake spoke about me when I wasn’t there. I tried so hard and cared so much, and that wasn’t reciprocated.

Breaking off the engagement brought me and my mom closer.

My whole life, my parents said they would feel more comfortable and settled if I got married. That’s kind of the old-school Indian mentality: A woman’s life isn’t complete until she has a husband.

“I don’t need a person in my life to be strong.”

My mom always pushed me to get married. But it was very validating when, after I said no to Shake at the altar, she acknowledged that I don’t need a person in my life to be strong. It was a pivotal moment in my relationship with her, and to be honest, I think she knew Shake wasn’t supposed to be in my life.

Being engaged to Shake meant embracing my culture as a part of my identity—and that won't ever change.

The best part of my relationship with Shake was our shared cultural foundation. It would be so dope to listen to Hindi music together or have that deeper level of intimacy you can only really have with someone who grew up in the same culture as you.

This experience taught me to love myself more and not worry about other people’s opinions. Because Shake had such a big, negative opinion of me, I realized…well, f*ck that. In a weird way, he taught me to never let another person dictate how I feel about myself. All that matters is what I think of myself and how much I’ve grown.