As you go through life, your understanding of your sexuality can change and evolve over time. Perhaps during your adolescence, you were only attracted to females, and then as a young adult in your twenties, you began to explore an attraction to men. Then, to your surprise, the sensual desire pendulum swung back again. You may be confused, but there’s nothing wrong with you. You just might be abrosexual.

If you're not familiar with the sexual identity, you're not alone—it's often confused with being bisexual, pansexual, sexually fluid, and asexual. But "abrosexual is a fluctuating sexuality," says Indigo Stray Conger, LMFT, CST, a couples and family therapist, AASECT-certified sex therapist, and co-founder of Mile High Psychotherapy in Denver, Colorado. "It fluctuates significantly over time, both in who you might be attracted to in terms of gender, and also how much you're interested in sexual activity with or without a partner."

Because being abrosexual is a nuanced and even nebulous sexual identity, "it often goes unrecognized in many people's lives," she adds.

Dr. Joe Kort, PhD, is a psychotherapist and board-certified clinical sexologist in Royal Oak, MI. He is also an author and lecturer and is the founder of The Center for Relationship and Sexual Health. He specializes in marital problems and conflicts, mixed-orientation marriages, male sexuality and sexual health concerns, sexual addiction, out-of-control behaviors, sexual identity issues, childhood sexual abuse, LGBTQIA affirmative therapy, and Imago Relationship Therapy.

There is no timeframe of how and when someone who identifies as abrosexual might shift to expressing their sexual orientation in a way that aligns with another identity and, to some, it may seem like they’re just bouncing along the sexuality spectrum, but Stray Conger assures they’re not. "It can also be normal to have a fluctuating sexual identity and to feel who your attractions are to change over time," she says.

What does it mean to be abrosexual, exactly?

An abrosexual individual can have different levels of sexual or romantic attraction, and they may also change their publicly-declared sexual orientation. While there can be confusion around it, Stray Conger says, "It's more of a term that helps people understand themselves when they're experiencing fluctuations and they're confused as to why." Often, someone may realize they're abrosexual because they feel as if there's nothing else to explain their shifting desires, she adds.

It's important to note that abrosexuality is not about confusion or trying to make up your mind; it’s a specific sexual orientation and should be treated as such. "Abrosexual is new, and so people don't think in that context, but once you have a label for it, then you can contextualize yourself within that lens," explains Stray Conger.

How can you tell if you are abrosexual?

If your own sense of yourself changes or you don’t feel a firm commitment to a specific sexual orientation, these could be signs of abrosexuality. But, ultimately, claiming any sexual identity is up to you. "I would let someone self-identify as that," Stray Conger says.

"You would have to have your own awareness of something changing, being involved with somebody and recognizing that you're having feelings, whether they're romantic or sexual," affirms Dr. Joe Kort, LMSW, CST, a psychotherapist and board-certified clinical sexologist in Royal Oak, MI. "You can only tell by giving yourself permission."

The same rules apply if you think someone you know might be abrosexual—wait for them to self-identify first, and remember never to assume anything about another person's identity. They'll tell you if/when they're ready.

What is the abrosexual flag?

You're likely familiar with the famous rainbow pride flag, but there are many other LGBQT+ flags that each represent different sexuality and gender identities. The abrosexual flag was created by Mod Chad of pride-flags-for-us in 2015 after an anonymous person requested it. The flag is comprised of five different color stripes: green, light green, white, baby pink, and dark pink. Currently, it is not known why these colors were chosen to represent the abrosexual identity. 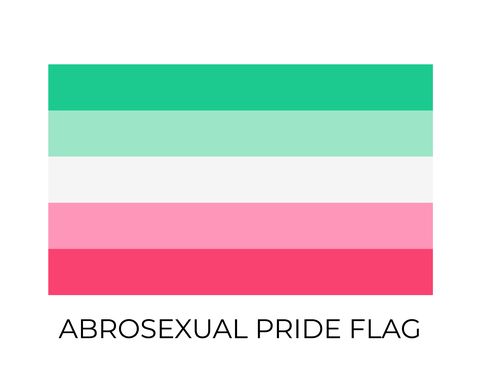 How does abrosexuality compare to other sexual identities?

A bisexual person, for example, is attracted to both men and women and does not typically fluctuate in their sexual identity. Meaning, once they identify as bi, they may go through periods of time where they date more people who identify as one gender than the other, but they maintain their sexual attraction to both. Someone who identifies as pansexual, however, is attracted—either physically, emotionally, or both—to all genders.

"That might look different for different people, in terms of whether or not they feel the same level of romantic attraction and/or sexual attraction to different genders," notes Stray Conger. "But that doesn't really change from the time you start being a sexual person, that's pretty static in terms of what your proclivities are."

Whereas with abrosexuality, she explains, "It changes pretty significantly. It’s really about a relational issue; it’s about an intrinsic feeling in your body of what awakens attraction within you."

Learn more about all the LGBTQ+ pride flags and the identities they represent:

What are some tips for dating someone who identifies as abrosexual?

Any relationship can—and does—have its challenges. To be involved with someone whose sexual desires shift over time adds to the complexity of the relationship, but here are some expert approved tips from Stray Conger and Kort when dating someone who is abrosexual:

How can you support someone who is abrosexual?

If someone you know tells you they are abrsoexual, it’s important to let them know that "fluctuations are normal," says Stray Conger. "...Encourage them to be self-knowledgeable about where their fluctuations are at and to communicate their fluctuations, so that they're not feeling shameful." Ultimately, you want to provide a safe space so they feel like they don't have to hide who they are—what everyone deserves.

What It Means To Be Pangender, Experts Explain

These Sex Podcasts Don't. Hold. Back.