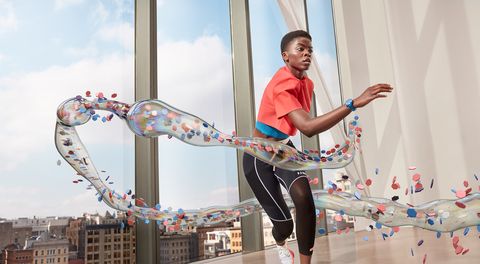 After kicking off a one-mile run, next thing you know, you check your watch and realize you’ve already breezed through four. Your body is working hard, but you don’t feel overexerted. Or maybe you’re in a yoga class and settle into an almosteffortless rhythm where you’re immersed in the teacher’s instructions and your movements. Perhaps you can recall a time when laps in the pool zoomed by because you were laser focused on your breath and each stroke.

If you can relate to any of these examples, you’ve experienced “flow state,” or what you may hear athletes (or anyone, really!) refer to as being “in the zone.” And if you haven’t? That’s why we’re here!

Flow is a positive, rewarding psychological phenomenon associated with being totally absorbed in what you’re doing and feeling that you are performing effortlessly, says Patricia Jackman, PhD, a senior lecturer in sport and exercise psychology at the University of Lincoln in the U.K. “Your sense of self vanishes,” says performance and executive coach Sarah Sarkis, PsyD—as does time perception. You can experience flow in many situations (like at a concert where you’re sucked into the music).

In one recent study, a participant described the flowy feeling like this: “My body felt really coordinated, and I had a lot of energy. I reached a point where it wasn’t painful and didn’t ache or hurt. I didn’t feel any discomfort.” Another individual summed it as up as feeling “like things were easy and enjoyable—a positive experience.”

The concept was first described by Mihaly Csikszentmihalyi in the 1970s and entered popular discussion with his book Flow: The Psychology of Optimal Experience, in 1990, but it’s having something of a renaissance among coaches and researchers who are studying the elusive state, attempting to bring its power to the masses. “There is real interest in this field, and big growth in the scholarly understanding of it over the past decade,” says Jackman. Around 100 studies have been published on flow in sport, exercise, physical activity, physical education, and adventure recreation over the past 10 years.

Beyond the obvious advantage of helping people simply enjoy their workout, experiencing flow makes an individual more likely to engage in that activity again, Jackman says. “Flow states could benefit our exercise motivation and engagement.”

Even better: We can *all* find flow, even if we’re new to an activity. Some simple behaviors—called flow triggers—can create the right environment. But a heads-up: Triggers are highly individual, and some of what follows may even seem contradictory. That’s because what helps one person may not work for the next. However, if you try the tips listed below, broken down by the various stages, you’ll have regular episodes of flow in workouts (and life!), Sarkis assures. A promise we support!

Lay the groundwork ahead of your activity starting to ensure peak performance.

One research-backed must: striking the right challenge-skill balance. “If the difficulty is way too high or too low, you’re not going to feel flow,” says Richard Huskey, PhD, an assistant professor at the University of California at Davis. So, find your sweet spot. Then, “As you master exercises, push yourself outside your comfort zone little by little,” Sarkis adds.

Flow states were linked to nonspecific goals in Jackman’s studies, meaning exercisers weren’t concentrating on a particular pace or time. Rather, their goals were open-ended—such as seeing how far they could run. “Without needing to hit a level of performance, these goals appeared to build confidence and help exercisers build into a flow state,” she says.

3. Reward yourself in advance.

You’re probably used to celebrating after you’ve wrapped a tough sweat. The case for flipping it: “If you take a little bit of a pause to do something enjoyable, it can help you refocus for a difficult task later on,” says Huskey. Even something as simple as listening to your favorite song during your warm-up or getting a pre-workout coffee at the café works.

These tricks keep the response strong all session long.

4. Struggle through the struggle.

When you’re having a hard time deciding whether to lace up your sneakers in the morning, you are at the gates of flow. “The brain requires a little friction in order to get some traction, and for most of us, that friction shows up as something unpleasant,” Sarkis says. “We are distracted and can’t seem to get into it, or we’re working really hard, pushing ourselves past our comfort zones, taking in lots of information.” The brain experiences this as a struggle, which it needs in order to get into flow. So if the struggle is all too real, know that you’re simply on the brink of greatness. Keep going!

To set the stage, put your phone on Do Not Disturb so you can still listen to music (FYI: Whether tunes help or hurt depends on the individual, per Sarkis) or stream a workout without the interruption of incoming texts, Sarkis says. Sweat before or after work when you won’t be bothered or when a babysitter or partner can watch the kids so you can stay in the zone.

6. Tap into your mind-body connection.

Immediate feedback is another facilitator. This could be a trainer fixing your form, or your own ability to self-assess and correct. “Be present during your workout…and consider ‘What’s my body telling me?’ ‘What do I need to tweak to get a little deeper into this yoga pose?’ ‘Where am I feeling unnecessary tension while running: in my jaw or hands?’” Sarkis says. “Making these little tweaks as you go along gives you a sense of flow-inducing autonomy.”

7. Or put your attention elsewhere.

Remember what we said about flow triggers being individual? For some people, distracting themselves from the physical sensations they’re experiencing is the key to maintaining this state. For example, focusing on music, letting your mind wander, taking in picturesque scenery, or conversing with a workout buddy could help you keep your mind away from thoughts about the task, Jackman says. You do you.

Ripple effect: Flow can help us focus on a subsequent task better, research shows. When Huskey has a daunting to-do ahead of him, he’ll jump on his Peloton for 30 minutes. It “helps set me up for success later,” he says. Win-win for sweat and beyond!

These tactics are not triggers per se but are important in allowing you to flow to the finish—and rev it up consistently.

8. Stop before you really want to.

When you’re flying in that so-present moment, you may want to keep cranking out pushups for days. Resist the urge, though, and stop before you’re totally depleted. The four stages of flow include struggle, release, flow, and recovery, Sarkis notes. Recovery is its own step in the process, and if you ignore it, you’ll burn out and have less of a chance of future flow.

Speaking of recovery, prioritize it! Taking care of your body and brain post-workout will make it that much easier for you to achieve flow the next time. That can look different for everyone, but it could include the usual suspects (foam rolling, stretching) as well as getting enough sleep, refueling properly, and activities like visiting a sauna or using a vibrating massage tool.

10. Assess and track your flow experiences.

After a workout in which you attempted flow, write down everything you tried. You can practice this step even when you aren’t successful. “In times where we don’t find flow, we get to look at our relationship with failure, struggle, and the things we bump up against when we’re not nailing it,” Sarkis says. And if you did experience flow (yay!): “Be curious about the conditions that give you these opportunities,” Sarkis says. Maybe you’ll even identify an entirely new trigger that works for you. 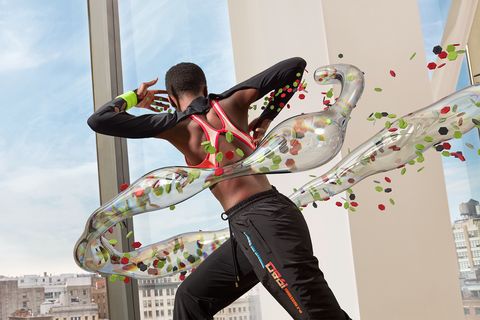 This article originally appeared in the May/June 2022 issue of Women’s Health.

A WH Editor's Honest Review Of The Hydrow Wave

Your Insider's Guide To Disney World

The Queen Is Once Again Pissed at Wills and Kate

I Tried TikTok’s Most Controversial Foundation